5 British animals to see from your cabin

If you’re staying in a cabin in the woods with the little ones then it’s a great place from which to spot wildlife from. Woods and forest areas are some of the richest habitats when it comes to providing homes to native species across the world. As trees offer the mainstays of shelter and food to thousands of species of wildlife, they too offer warmer, safer homes than open habitats for many critters and creatures. With the numbers of certain animals dwindling due to hunting, environmental issues and even deforestation, let’s take a look at 5 British animals that you’ll only see in the woods, to make sure that you never miss a thing while on your very own cabin holiday!

1. Hazel Dormouse from your cabin

The hazel dormouse is a cute little critter that is found mainly in south England and Wales, and likes to live in coppiced wood and scrub. They are nocturnal animals and thrive on food sources such as hazel and brambles. Now regarded as a priority species for the UK Biodiversity Action Plan, be sure to keep your eyes open in connected woods and hedgerows to spot one!

2. A Badger from your cabin

A badger is a staple part of British wildlife, and while many have faced execution due to the spreading of disease, this mammal is fast becoming a protected species in the UK. Badgers are mainly nocturnal and you will often find them in groups called setts – just be careful when approaching one, as they are fiercely territorial.

3. A Red Deer from your cabin

Just like the badger is a key British woodland animal, so is the red deer. Red deer are native to England and can be in woodland and forests like the Lake District, Exmoor, New Forest and Norfolk. The reddish-brown fur that prompted the name of these deer changes to dark brown or grey in the winter time. Stags are particularly noticeable for their shaggy hair and long antlers. You’ll find red deer in more secluded parts of the forest, as they like to chew their cud in peace.

4. Purple Emperor Butterfly from your cabin

The purple emperor butterfly is an elusive British woodland native, but a beautiful one to say the least! As Britain’s second largest butterfly, males can grow to the size of a small bird. Easily recognized by their large, dark purple colourings, and white banded wings, it is the males that feature the iridescent purple hue, while the female butterflies are brown. Found mainly in woodland throughout southern England, you may have to put in some hard searching to find one – although the species does seem to be expanding its territory into the suburbs. 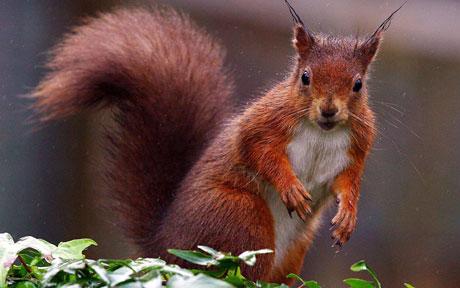 The only squirrel species that is native to the UK, the red squirrel is found on Anglesey and in areas around northern England and Scotland. As the number of red squirrels has declined in recent years due to their susceptibility to the squirrel pox virus carried by their grey cousins, conservation programmes have been enforced to both bolster and reinvigorate the species. They are notoriously much shyer than their counterparts, so if you are lucky enough to spot one, make sure to be extremely careful and quiet if you want to get a little bit closer!